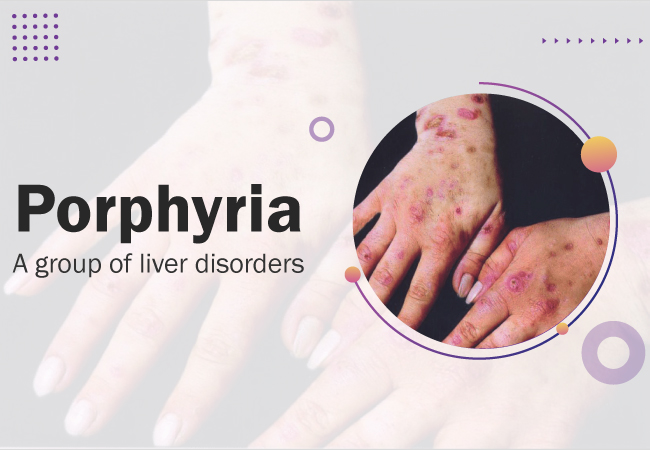 Porphyrias are metabolic disorders caused by altered activities of enzymes within the heme biosynthetic pathway. Porphyrias can cause neurovisceral manifestations and cutaneous photosensitivity (either chronic and blistering or acute and mostly non-blistering). Heme is essential for the transport of oxygen to cells in the body. If any step in the synthesis of heme is blocked, an intermediate chemical accumulates in the cell, resulting in oxygen depletion. Those intermediate chemicals, known as porphyrins or porphyrin precursors, are the substances of which heme is composed.

The types of Porphyria are:

According to the National Institute of Diabetes and Digestive and Kidney Diseases, Acute Intermittent Porphyria is the most common Porphyria.

Acute Intermittent Porphyria is a rare inherited metabolic disease due to a deficiency of the hydroxymethylbilane synthase, also known as porphobilinogen deaminase, in heme biosynthesis. AIP manifests after puberty with occasional neuropsychiatric crises associated with the accumulation of porphyrin precursors released from the liver into the circulation. Delays in the diagnosis occur because clinical manifestations are unspecific and commonly mimic acute encephalopathy or abdominal crisis of another origin.

AIP manifests after puberty, especially in women (due to hormonal imbalances). Symptoms usually come as discrete attacks that develop over two or more days.

The common symptoms of AIP are:

A diagnosis of AIP can be difficult because most symptoms are nonspecific and occur periodically. A diagnosis is usually based on identifying characteristic symptoms from detailed patient history, a thorough clinical evaluation, and specialized tests.

Healthcare professionals do screening tests to measure the levels of the porphyrin precursor porphobilinogen (PBG) in urine is essential to confirm a diagnosis of acute Porphyria.

The treatment of AIP is directed toward the specific symptoms that are apparent in each individual. Treatment may require the coordinated efforts of a team of specialists. Pediatricians, neurologists, hematologists, hepatologists, psychiatrists, and other healthcare professionals may need to systematically and comprehensively plan an affected patient’s treatment.

The treatment objective is to manage symptoms, prevent complications, and suppress heme creation (synthesis) in the liver with hematin, which reduces the production of porphyrin precursors.

According to the Rare Disease Database, in Europe, the prevalence of symptomatic AIP is reported to be 5.9 per million people in the general population.

As per the research work of Doctor Dhanpat Kumar Kochar, S.P Medical College, Bikaner (Rajasthan), India, the first case of AIP in India was reported by Wig and Malhotra in 1963 in Bikaner, Rajasthan, and since then, 196 more cases has been reported till date.

According to an article published by Apollo medicines, the prevalence in India is unknown due to a lack of extensive studies. The first case of AIP in India was reported in 1954. In a study by Gauri et al. in 1990, 15 patients with AIP were detected out of 2,500 persons of the Maheshwari community surveyed in the Sri-Dungargarh municipal area of Bikaner.

Most patients become symptomatic at the age of 18-45 years.