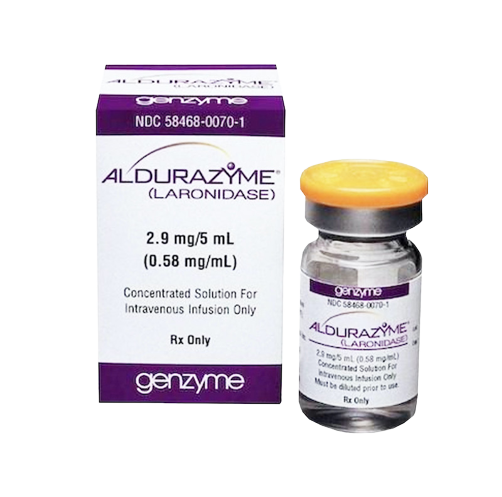 What is the use of Aldurazyme?

Aldurazyme is used in the treatment of patients with Hurler and Hurler-Scheie forms of Mucopolysaccharidosis I (MPS I) and for patients with the Scheie form who have moderate to severe symptoms.
Aldurazyme has been shown to improve pulmonary function and walking capacity.

Dosage and administration of Aldurazyme

The recommended dosage regimen of Aldurazyme is 0.58 mg/kg of body weight, and it should be administered once weekly as an intravenous (IV) infusion. Healthcare professionals recommend pretreatment with antipyretics and antihistamines for 60 minutes before starting the infusion.

Note: Aldurazyme must not be administered with other medicinal products in the same infusion. The compatibility of Aldurazyme in solution with other products has not been evaluated.

Overdosage
There is no experience with overdoses of Aldurazyme. If someone takes an overdose, consult the doctor immediately and keep the patient under observation.

Sleep apnea is common in MPS I patients. One should consider evaluation of airway patency before initiation of treatment with Aldurazyme. Patients using supplemental oxygen or continuous positive airway pressure (CPAP) during sleep should have these treatments readily available during infusion in the event of an infusion reaction or extreme drowsiness/sleep induced by antihistamine use.

One should exercise caution when administering Aldurazyme to patients susceptible to fluid overload or patients with acute underlying respiratory illness or compromised cardiac and respiratory function for whom fluid restriction is indicated. One should make available appropriate medical support and monitoring measures during Aldurazyme infusion. Some patients may require prolonged observation times based on the patient’s individual needs.

Handling and storage of Anaphylaxis

Aldurazyme is supplied as a sterile solution in clear Type I glass 5 mL vials (2.9 mg Laronidase per 5 mL).

Aldurazyme is a medicine that contains Laronidase. Aldurazyme is used in the treatment of patients with Hurler and Hurler-Scheie forms of Mucopolysaccharidosis I (MPS I) and for patients with the Scheie form who have moderate to severe symptoms. The medicine comes in the form of vials for intravenous infusion.

For medicine, Aldurazyme Biomarin is the innovator, and Ikris Pharma Network is an authorized partner who can help access this medicine in India for the patient through legal procedures. To know more, contact Ikris at toll-free no. 18008891064 or write at info@ikrispharmanetwork.com.

The Aldurazyme cost is reasonable. To authenticate this drug, you can call 18008891064 or email info@ikrispharmanetwork.com.

In India, you can buy Aldurazyme with the help of Ikris Pharma Network, an authorized partner of “Biomarin” for this medicine.

WHO Publishes Guidelines on HIV, Hepatitis & STIs for key Populations

Relations of India and Ghana: Healthcare and pharmaceutical sector