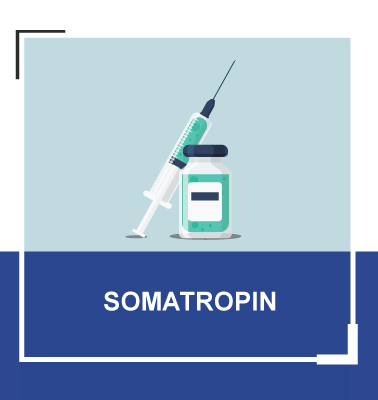 What is Somatropin, and what it is used for?

The recommended dose of Somatropin Injection should be administered subcutaneously.

The most commonly reported side effects due to Somatropin hgh include: headaches, injection site reactions/rashes and lipoatrophy.

How Supplied/Storage and handling:

The unused somatropin injection must be stored at 2°C to 8°C/36°F to 46°F (refrigerator). Do not freeze. Avoid direct light. After the initial injection, a Somatropin FlexPro prefilled pen may be either stored in the refrigerator (2°C to 8°C/36°F to 46°F) and used within 4 weeks or stored for up to 3 weeks at room temperature not more than 25°C (77°F). Discard any unused portions.

Somatropin is a medication that has been approved by the U.S. FDA mainly for the treatment of growth disorders in children and growth hormone deficiency (GHD) in adults.

This medicinal product is supplied as injection in four dosage strengths, which are as follows:

Somatropin is preloaded in the Somatropin FlexPro pens for subcutaneous administration.

Somatropin specifically is a type of medication called Immune Modulators.

You can buy Somatropin from any authorized wholesaler after getting a prescription from a qualified doctor. It is always better to check the credential of the wholesaler/supplier/exporter before buying the product.

The buyer should check the existing law in their home country before importing the product.

Patients can simply fill the order form or can send mail at info@ikrispharmanetwork.com. Patients can also send WhatsApp messages to +91 8130290915 or can dial Toll-Free number: 18008891064. We will reply ASAP with the details of the somatropin price in India as well as the procurement procedure.

Note:- The order will be confirmed only after the receipt of the Valid prescription of the Clinician.

All Trademarks and Brands that appear on the website belong to their respective owners and Ikris Pharma Network does not lay and claim on them we only provide Information. We are NOT ONLINE store and We do not sell Narcotics and Sedatives. Somatropin is a pharmaceutical drug that legally requires a medical prescription to be dispensed.