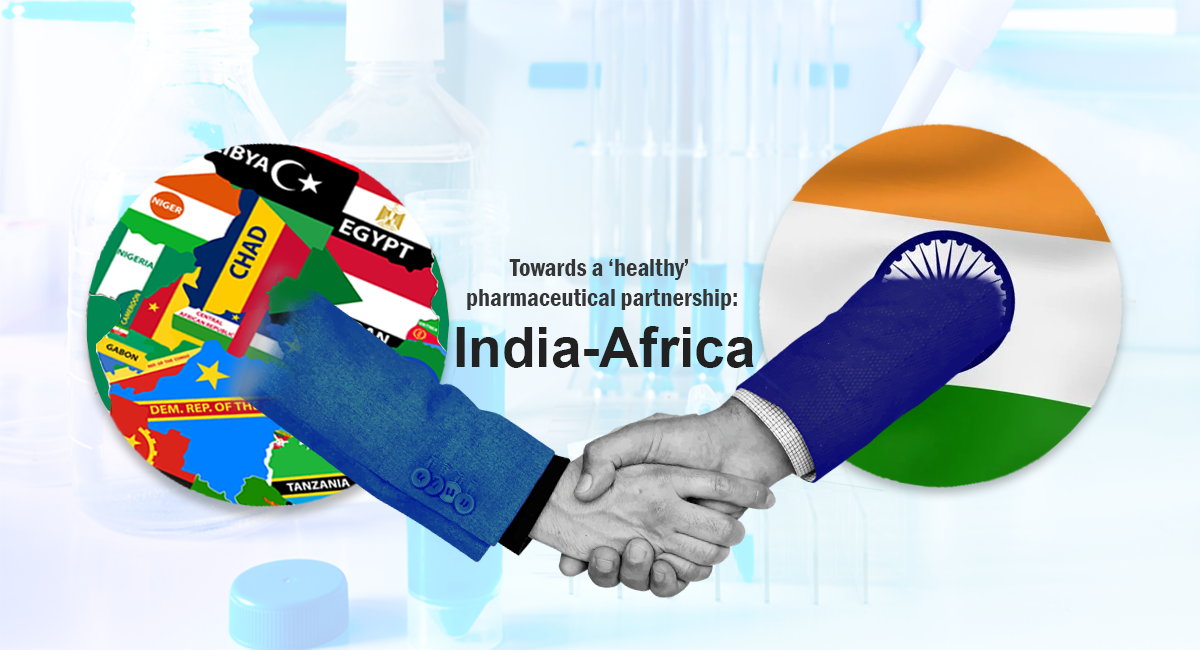 According to the Government of India’s estimates, the Indian pharmaceuticals industry is the third-largest in volume and the 13th largest in value. It is seen as global manufacturing and a research hub worldwide. A large raw material base and the availability of a skilled workforce give the industry a definite competitive advantage. Globally the business of pharmaceutics is changing rapidly; two major shifts are disrupting the sector. The first will see a change in the balance of power across the healthcare value chain as governments and medical aid providers start to pressure pharmaceutical companies to drop their prices. The second involves a move from reactive healthcare to prevention, which will attract new entrants and unsettle the status quo.
The Indian pharmaceuticals market is dominated by generic drugs, which constitute nearly 70% of the market, whereas over-the-counter (OTC) medicines and patented drugs make up 21% and 9%, respectively.

During the first half of the 20th century, India depended on countries such as the UK, France, and Germany for pharmaceutical products. With the establishment of the Hindustan Antibiotics Ltd. in 1945 and the Indian Drugs and Pharmaceuticals Ltd. in 1961, the Indian government took its first steps towards self-reliance in pharmaceuticals. However, the local industry did not develop substantially during this period, and the Indian pharmaceutical industry consisted almost exclusively of multinationals. Further, until the 1970s, multinationals were not keen on manufacturing in India, and the product patent regime prevented Indian firms from manufacturing. The product patent regime prevention resulted in an underdeveloped domestic industry on the one hand and exorbitant drug prices due to monopolies.

In 1972, the Patents and Designs Act, 1911, which provided product patent protection for pharmaceuticals, was replaced by the Indian Patent Act, 1970. The new Act recognized only process patents, abolishing patents on breakthrough products that could help develop the domestic industry. The Patents and Designs Act allowed domestic firms to legally produce and sell patented medicines in other parts of the world. The local industry then established a reverse-engineering capacity to develop and market copies of patented medicines at lower prices. This encouraged the domestic production of pharmaceuticals, in addition to measures such as restrictions on the import of finished formulations, high tariff rates, and the requirement for firms to match the import of bulk drugs to the purchase from domestic sources at a fixed ratio, and equity ceilings on foreign participation. By 1991, Indian firms were producing 80 percent of the total formulations in the country.
Today, India has more than 10,500 manufacturing units and 3,000 pharmaceutical companies.

According to the Ministry of External Affairs, India’s data shows that the South African pharmaceutical sector is the largest drug market in Africa, with the fifth-highest expenditure on pharmaceuticals per capita. The total market value estimation in 2015 was at R44.0bn, with R34.2bn (86.7%) attributable to the private healthcare market and R6.8bn (13.3%) to the public sector.
As per the article published in “Business Standard” in FY17, Indian drugmakers exported medicines worth $3 billion to Africa. The continent is the second-largest export market for Indian companies after the United States.

As per the Ministry of External Affairs, the Government of India, India, is dispatching packages of medicines to more than 25 countries in Africa. This package of medicines includes Molnupiravir, Ritonavir, hydroxychloroquine, paracetamol, and other drugs immediately required to fight the pandemic to combat the pandemic in African countries.

With an estimated population of 1.2 billion, Africa accounts for approximately 16 percent of the global population but almost 24 percent of the global disease burden. Seventy percent of all HIV patients and 90 percent of malaria fatalities are recorded in African countries. The lack of access to essential life-saving medicines is thus a major challenge in the continent. These countries rely primarily on imported pharmaceutical products to meet local needs due to the lack of a robust domestic pharmaceutical industry. According to the World Health Organization (WHO), more than 90 percent of the 54 national medicines regulatory authorities (MRAs) across Africa have minimal or no capacity to regulate various aspects of medicine manufacture and delivery.

The Indian government could also play the role of a facilitator and create working groups with medical professionals to host video or teleconferences with counterparts from African countries.
Despite necessary compliance with the TRIPS (trade-related Aspects of Intellectual Property Rights) conditions — particularly relating to the inclusion of medicine patents — the African countries have nurtured a booming domestic generic drug industry. It has been a strong advocate for access expansion. Today, Indian-made ARV drugs constitute 80% of Africa’s total consumption.

Overview of Healthcare Sector of Burundi; an East African country