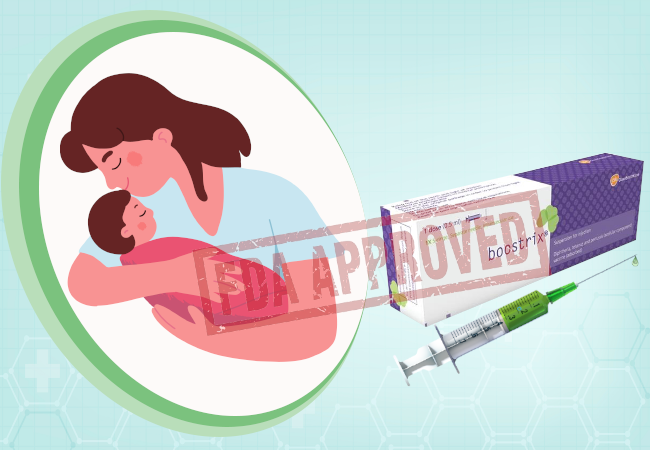 Administered as a single 0.5-mL dose during pregnancy, the vaccine Boostrix boosts antibodies in the mother which are then transferred to the developing baby. Babies are at increased risk for getting Pertussis or Whooping Cough and having severe complications.

According to Peter Marks, M.D., Ph.D., director of the FDA’s Center for Biologics Evaluation and Research, “While vaccination is the finest method for providing protection, infants aged younger than two months are too young to be protected by the childhood Pertussis or Whooping Cough vaccine series. This is the 1’st vaccine authorized mainly for use during pregnancy in order to prevent a disease in those who are young infants and their mothers are vaccinated during pregnancy.”

Whooping Cough, also known as Pertussis, is a common respiratory disease, resulting in frequent outbreaks. It is called whooping cough because of the “whooping” sound that an individual makes when gasping for air after a fit of coughing. Most severe cases of whooping cough, hospitalizations and deaths occur in infants aged younger than 2-months who are too young to be protected by the childhood whooping cough vaccine series.

According to the CDC (also named Centers for Disease Control and Prevention), 4.2 percent of the total cases of Whooping Cough reported in the US in the year of 2021 were in infants aged younger than 6 months and around 31 percent required hospitalization. When the vaccine Boostrix is used during pregnancy, it works by enhancing the antibodies in the mother, which are transferred to the developing baby.

Boostrix vaccine was previously approved by the FDA in the year of 2005 as a single dose for booster immunization against tetanus, diphtheria and pertussis in patients 10 through 18 years of age. Subsequently, Boostrix was also approved for use in patients aged 19 years and older. The approval also included use of an additional dose aged 9 years or more following the initial dose of a Tdap vaccine. The approval of the Boostrix vaccine has always included its application during pregnancy in order to protect those who are vaccinated.

This approval (October 07) is specific to use in pregnancy in order to prevent Whooping Cough or Pertussis in infants aged younger than 2 months. Since 2012, the Centers for Disease Control and Prevention has recommended the consideration of Tdap vaccines during the 3’rd trimester of each pregnancy.

The approval was supported by assessment outcomes indicating that the Boostrix vaccine has 78% efficacy in order to prevent Whooping Cough or Pertussis among infants aged younger than two months when used during the 3’rd trimester of pregnancy.

The assessment did not identify any vaccine-related side effects on pregnancy or on the fetus/newborn.

In previous clinical assessments, the most commonly seen side effects by those who received Boostrix vaccine were redness at the injection site, pain, headache, fatigue and gastrointestinal symptoms.

HIV Tablets Dolutegravir and Rilpivirine Get Tentative Approval from US FDA