In a healthy body, the liver filters out excess copper and releases it through urine. With Wilson’s Disease, the liver cannot remove the extra copper properly. The extra copper builds up in organs such as the brain, liver, and eyes.

NOTE: The rare genetic Disease, Wilson’s Disease, can be stopped with early diagnosis. Treatment may involve taking medication or getting a liver transplant. Delaying or not receiving treatment can cause liver failure, brain damage, or other life-threatening conditions.

Wilson’s Disease is present by birth, but signs and symptoms don’t appear until the copper builds up in the brain, liver, or another organ. Signs and symptoms vary depending on the parts of your body affected by the Disease. They can include:

A mutation in the ATP7B gene, which codes for copper transportation, causes Wilson’s Disease. You must inherit the gene from both parents to have Wilson’s Disease. This can mean that one of your parents has the condition or carries the gene. 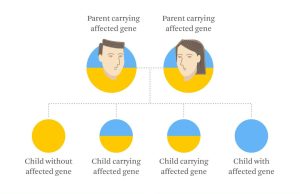 Wilson’s disease might be complex for doctors to diagnose initially. The symptoms are similar to other health issues like heavy metal poisoning, hepatitis C, and cerebral palsy.

There are various tests to examine this rare disease, such as:

Successful treatment of Wilson’s disease is based on timing more than medicines. Treatment often happens in 3 stages and should last a lifetime. If someone stops taking the medications, copper can build up again.

In the first stage, healthcare professionals remove excess copper from the body through chelating therapy. Chelating agents include drugs such as d-penicillamine and Trientine or Syprine. Such drugs will remove the extra copper from the organs and release it into the bloodstream. The kidneys will then filter the copper into the urine.

The goal of the 2nd stage is to maintain normal levels of copper after removal. The doctor will prescribe zinc or tetrathiomolybdate if you’ve finished the first treatment or show no symptoms but have Wilson’s disease.

After the symptoms improve and your copper levels are normal, one shall want to focus on long-term maintenance treatment. This includes continuing zinc or chelating therapy and regularly monitoring the copper levels.

Although one can’t prevent Wilson’s disease, one can delay or slow the condition’s onset. If one finds out he/she has Wilson’s disease early on, one may be able to prevent the symptoms from showing by taking medications such as zinc. A genetic specialist can help parents determine their potential risk for passing Wilson’s disease to their children.